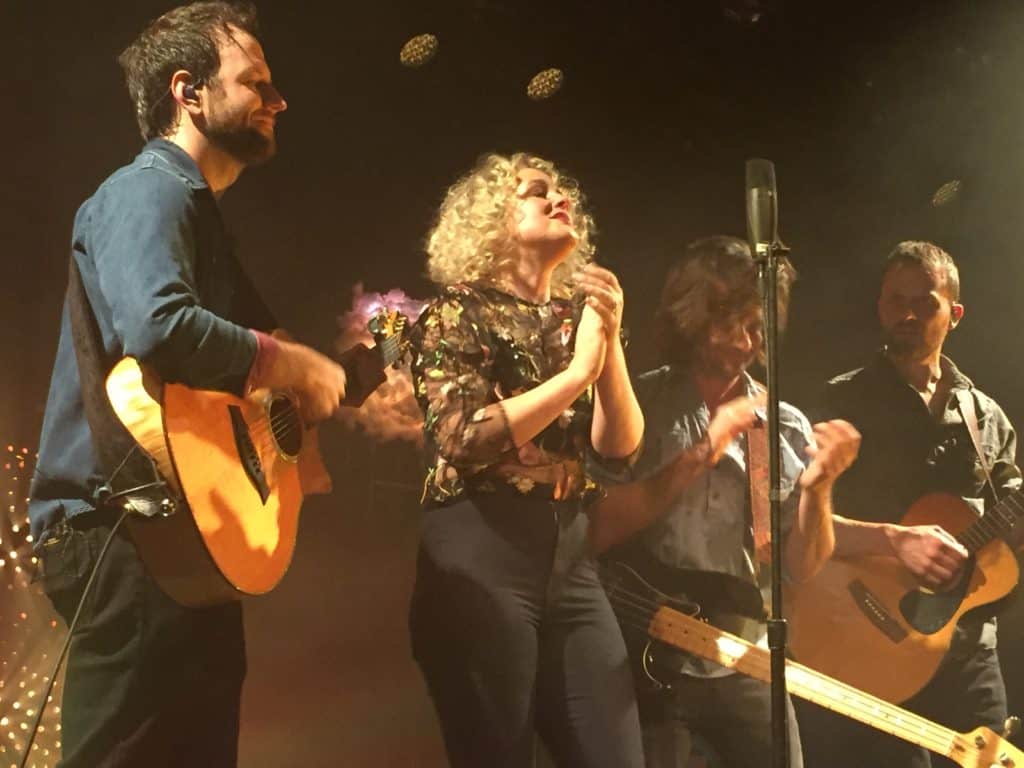 There was a small crowd sitting at their tables when I walked into the Commodore in Vancouver. It was dark with twinkling lights over the dance floor and the stage was illuminated in purple. I made my way to the stage, front and center. A few others joined me. But as soon as the opening act, Logan Mize, hit the stage, people came out of nowhere and soon there were fans cheering for Logan. I had never heard of him but he clearly had fans. They new all the words to his songs and they were shouting out requests. Logan was pleasantly surprised. With his guitar and wearing his family business’ hat, his band mate playing the Cajon accompanied Logan. In his deep muscular voice, he sang to the crowd.

So who is Logan Mize?

A singer songwriter from Kansas but has lived in Nashville for quite sometime. In 2010, Logan signed a publishing/ recording deal with Big Yellow Dog Music. For years he played many venues across the U.S. making new fans in each city.  In 2015, Logan landed a new record deal with Arista Nashville and released his first single for this label “Can’t Get Away From a Good Time” on his EP, Pawn Shop Guitar. Then earlier this year he releases his follow LP, Come Back Road. After Logan, DJ DYRTYBYRD whom we would see again later on entertained us. He was having a great time mixing tunes and dancing along.

Now it was finally time. The stage lit up by only the beautiful colorful LED clouds that floated on stage. The band taking the stage playing a deep sultry sound. The beautiful Cam walked into the stage, looking elegant in black with gold high heels and her famous golden locks.

Her voice, crisp, clear, perfect. Cam’s lyrics are about heartbreak, relationships, mistakes and lessons learned. Her music, upbeat new country, amazing ballads, mixed with boot stomping old fashion country sound. Starting off the night with her brand new single “Diane”. A fun song about getting causing with someone else’s man and explaining that she didn’t know he was her’s.

Mid-way through the night, the band came together in the center of the stage and did an acoustic Cover Of “Cecilia”.  Clapping and stomping throughout the song. They had the crowd fully involved.

Cam told us a story about the song “Fireball Whiskey” and how she wrote to the maker of Fireball asking them to use her song to promote their whiskey. They wrote back. Unfortunately they felt that her song about Fireball Whiskey prompted irresponsible drinking. She laughed. So now before she sings this song, she feels the need to tell everyone to drink responsibly. It’s a really cute song and oh so true.

Ending the night with the song we were all waiting for. The song where it all began. “Burning House”. The song that got her a Grammy nomination and became a Platinum selling #1 single. Such a powerful song. As they finished, they bowed and left the stage but the fans were wanting more. Chanting, “Encore, Encore”.

Cam and the band came back out. She talked about her new single “Diane” and how proud of the song she was. She didn’t expect it to be getting all the positive feedback it was getting. Cam talked about being a 1/4 Canadian since her grandmother was born in Saskatchewan. This was her first time to Vancouver, as she had to cancel her concert 2 years ago to attend the Grammy’s.

She began her career as a songwriter, composing material for many artists including Miley Cyrus. In 2015 Cam signed with Sony Music Entertainment and released her debut major label EP “Welcome to Cam Country” which included the breakout track “Burning House”. It’s always so enlightening to see an artist live. It makes you connect with them and their music more. I look forward to following Cam’s success in her bright future. She is definitely going to be around for a long time.